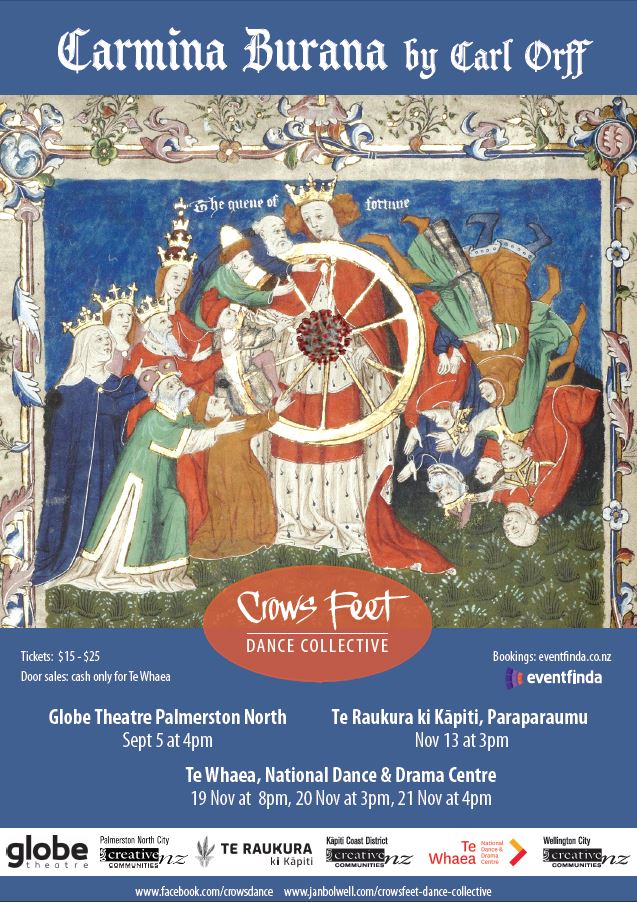 Crows Feet Dance Collective is presenting a danced version of Carmina Burana on SEPTEMBER 5TH at the Globe Theatre in Palmerston North, Saturday November 13th at Te Raukura, Paraparaumu and the following weekend at Te Whaea in Wellington,

Carmina Burana is a cantata for orchestra, chorus and vocal soloists by the German composer Carl Orff that premiered in 1937 in Frankfurt, Germany.

Orff drew his text from a 13th century manuscript containing songs and plays written in Latin and medieval German, which was discovered in 1803 at the Bavarian monastery of Benediktbeuern. Dubbed the Carmina Burana (Songs of Beuern) by the German philologist Johann Andreas Schmeller, the texts present  a varied view of medieval life, including religious verses, social satires and bawdy drinking songs.

Orff selected 24 songs, which he arranged inot a prologue, an epilogue, and three parts of roughly equal length. The first part, Primo Vere (In Early Spring) presents youthful, energetic dances; the second part, In Taberna (In the Tavern), evokes drunken feasting and debauchery; and courtship and romantic love are the subject of the third part, Cour d’Amours (Court of Love).

The orchestration of Carmina Burana is ideal for dance as melodies and harmonies combine with heavy rhythmic percussion to give the music a primeval and visceral character. Crows Feet is using the recording by Andre Previn and the Vienna Philharmonic.

The best known song from Carmina Burana is O Fortuna (O Fortune) which serves as both prologue and epilogue. It frmaes the revelry of the three main movements with a stark warning about the power of luck and fate, offering the ancient image of the wheel of fortune that deals out triumph and disaster at random. This message seems particularly appropriate as we live through the age of COVID 19.