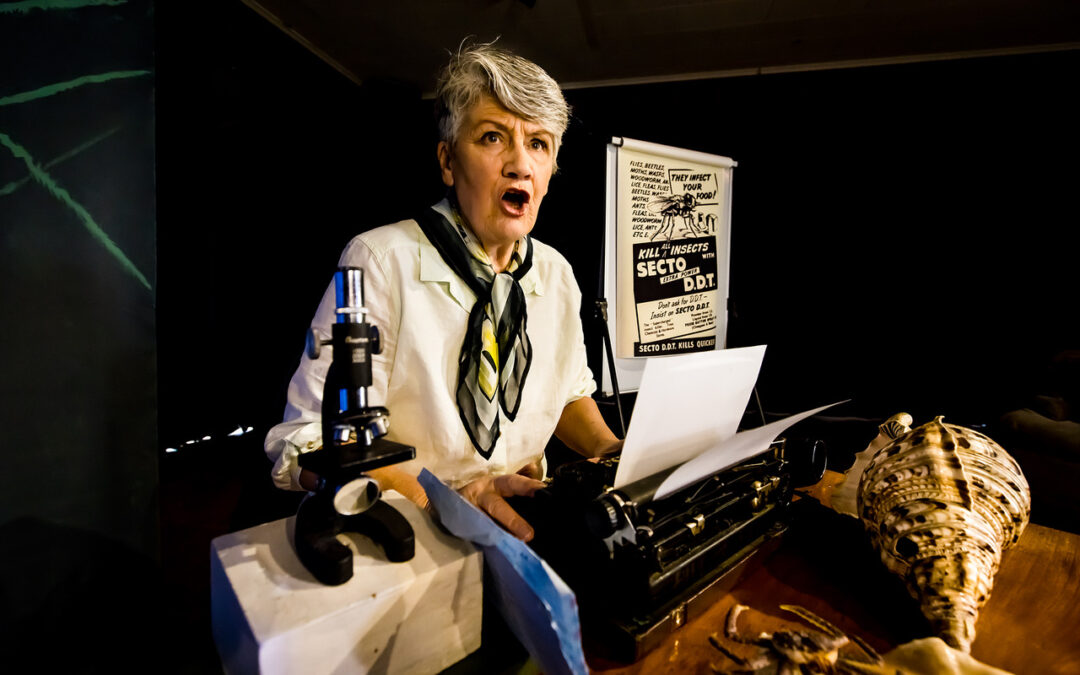 The dead bird that adorns the programme cover for Silent Spring Revisited: Rachel Carson’s Fight for Nature quietly focuses our attention on what Jan Bolwell and her creative team will address over the next hour. But she opens the show by making a song and dance over a buzzing blowfly, swatting at it, spraying it (haven’t we all done this?) then breaking into a celebratory commercial for Hansen’s 22% DDT.

The showbiz trope gives way to a friendly chat about the hall we are in (the Northland Scout Group Den, in this case, downstairs in the Northland Community Hall): part of a City Council initiative to utilise civic amenities more and make arts-driven events more accessible.

Bolwell draws us into the story by re-enacting – with a little help from a volunteer – the moment when her farm-raised grandmother Hilda – introduced to us 15 years ago in Here’s Hilda! – alerted Jan, aged 12, to US marine biologist and conservationist Rachel Carson’s alarm-raising book, Silent Spring, hot off the press in 1962.

Nearly 60 years on we would like to think a lot has changed when it comes to the use of toxic chemicals in land and pest management for food, housing and commercial gain, but the more things change the more they stay the same. Bolwell skilfully interweaves the personal, political, local and global dimensions of this issue, as she morphs in and out of being Hilda, Rachel and herself. And it becomes very clear there is still a lot to be done.

The just-released 6th IPCC Report on climate change, declaring ‘red alert’, and the recent furore over university scientists claiming indigenous knowledge of nature has no scientific validity, are further testaments to the fact that essential truths have always been known and humankind has wilfully ignored them in its pursuit of wealth and an illusion of health and wellbeing.

Not that Bolwell is in the least bit hectoring as she confronts us with these realities. She and director Annie Ruth facilitate a friendly relationship with the audience that exemplifies ‘he waka eke noa: we are all in this together’, not least by enrolling us as reporters questioning a besieged yet calm Rachel Carson, back in the day.

The condemnation and scorn heaped on Carson by farmers, big business and politicians is as toxic as the pesticides she is warning us of – a syndrome reflected in the animosity our own freshwater ecologist and science communicator Mike Joy is routinely subjected to right now. The addition of his voice and image adds to the immediacy of this important conversation.

Although we are confronting scientific imperatives here, it is relationships – between people; between people and nature; within the nature of which we are part – that carry the story. The script brings everything into present action, including excerpts from Rachel’s public writing and her heartfelt letters to a clandestine lover. Eschewing an American accent for Rachel, Bolwell and Ruth keep the focus firmly on the play’s central theme.

The performance space is made intimate and subtly welcoming by Trish Stevenson’s five painted panels which evoke the hidden dimensions of nature. Helen Todd’s simple lighting design brings warm illumination to it all and Jan Bolton’s compositions, augmented with a bit of Beethoven and authentic soundscapes (operated by Neal Barber), add to the overall honouring of natural forces.

For a performance work that deals with what the programme calls “these apocalyptic times”, Silent Spring Revisited: Rachel Carson’s Fight for Nature is an unthreatening wake-up call and somehow reassuring in that all those present, at least, are ‘on the same page’. The question, as ever, is how to enrol the naysayers.

Go for the show and stay for more conversation and Hilda’s scones.