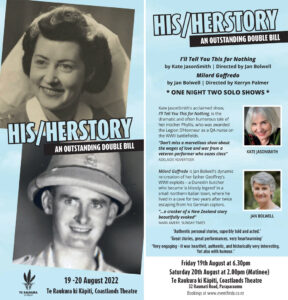 Following their acclaimed season at Circa Theatre, Kate JasonSmith and Jan Bolwell are bringing their plays to the Kapiti Coast for two shows only.  These two fascinating solo shows offer a terrific night of entertainment, reaffirming the storytelling power of theatre.

Both Kate and Jan have close associations with the Kapiti Coast. Kate grew up in Pukerua Bay and her mother Phyllis spent her last years at Coastal Villas in Paraparaumu.

Jan is a Paekakariki resident and is a well known performing artist and director in both theatre and dance.

“We are both delighted to be bringing these deeply personal war stories to residents on the Coast.

I’ll Tell You This for Nothing – written & performed by Kate JasonSmith, directed by Jan Bolwell

Phyllis Garvin an Irish QA nurse on the WWII battlefields who lived most of her life in NZ, was honoured with France’s highest decoration, the Légion d’Honneur for extreme bravery. Sent to the front lines on D-Day, Phyllis’s hospital followed the battles through Europe and finally to the liberation of Belsen Concentration Camp. Amidst this drama she found the love of her life, a Catholic, thus igniting a new and personal war with her mother, a Protestant. In a solo performance written and acted by her daughter Kate JasonSmith I’ll Tell you this for Nothing presents the dramatic and often humorous tale of her mother’s life in an acclaimed show about war, courage, danger and romance.

“Superb, from the first minute to the last… a treat for theatre lovers.” Adelaide Advertiser

Milord Goffredo, is Jan Bolwell’s dynamic re-creation of her father Geoffrey’s WWII exploits – a Dunedin butcher who became “a bloody legend” in a small northern Italian town. Geoffrey hid in a cave for two years after twice escaping from his German captors. During this time, he was looked after by a kind and courageous Italian family who nicknamed him Milord Goffredo. Jan wrote this play to honour her father’s generation, men whose lives were shaped by their war experiences, and who turned to each other for support and comradeship in the post war years. Geoffrey Bolwell’s story is typical of thousands of soldiers who suffered terrible wartime experiences post war trauma and the difficult adjustment to civilian life.

What Circa audiences had to say:

“Very engaging – it was heartfelt, authentic, and historically very interesting. Yet also with humour.”