Musing About Mozart and Dance 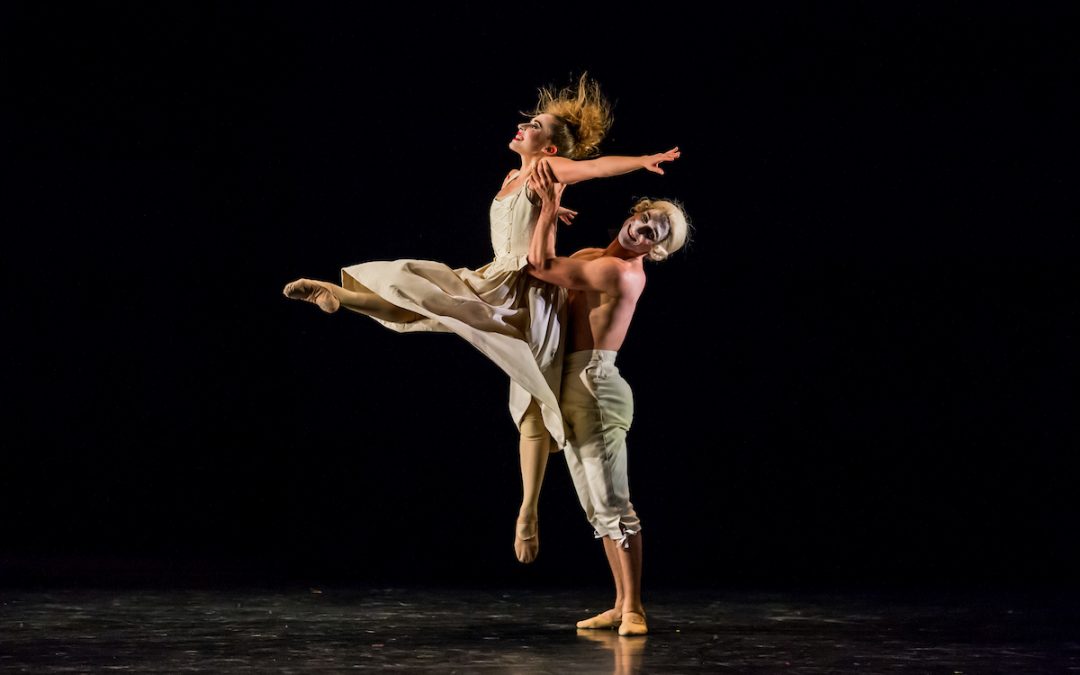 I clomp my way up the stairs along with the students to the third tier of the Wellington Opera House to see the Royal New Zealand Ballet’s latest programme Dancing with Mozart. The precipitously built seats allow little room for squeezing past other audience members, and I’m trying hard not to pitch my weight forward in case I land in the lap of the people seated in front of my row.
I have an awful memory of that happening when we presented my play about Frances Hodgkins ‘Double Portrait’ at Expressions Theatre in Upper Hutt a few years ago. An elderly gentlemen stood up and promptly somersaulted over the seats in front and landed on his back in the aisle. It was a terrifying sight. It’s a long time since I’ve sat in ‘the gods’ but I am enjoying the atmosphere and eavesdropping on student conversations. It will be interesting to observe their reaction to this programme. As a result of working for the RNZB devising dance education resources based on their programmes, and the odd bit of reviewing, I am accustomed to getting pretty good seats in the stalls or the dress circle. But I am happy to be amongst this young audience wrapped up in their coats and scarves against the winter chill. They will discover soon enough how the heat rises in the Opera House.
Listening to the excited burble around me, I am taken back to London and Covent Garden in 1979. I am a dance student at the Laban Centre in Lewisham Way, and night after night over two weeks I bus into the West End and sit up in the gods with my four pound ticket to watch the New York City Ballet. This is the company’s first return to London in fourteen years and they perform an immense repertoire. Queuing up for cheap tickets I listen to grumpy English people saying that all Balanchine’s dances look the same, and you really can’t distinguish one from the other. For the English, fed on a diet of Ashton and MacMillan, Balanchine is definitely an acquired taste. In 1979 the NYCB is a foreign beast to English balletomanes, whereas now companies all over the world dance Balanchine’s works, including the RNZB.

Their programme begins with Balanchine’s 33 minute Divertimento No 15 by Mozart. This 1956 ballet has been described by New York Times dance reviewer, Alistair Macauley as ‘ the most sublime choreography ever made to music by Mozart’, one in which Balanchine ‘creates an ideal realm in which courtesy, chivalry, brilliance, serenity and expansiveness coexist and give off light.’ While Macauley suggests this work can be ‘glorious to behold’ he cautions that ‘small or bland performances can shrink it into mere confectionery.’ Sad to say, this is pretty much what we got with the RNZB’s attempt. I am not surprised that a number of local reviewers found the work ‘old hat’ ‘dated’ or ‘uninspiring.’ I would claim this is not about the quality of the choreography, but about the dancers inability to transcend the challenging technical requirements and transport us into another realm through their presentation.

I visit Seattle often, as my sister has lived there for the past thirty-five years, and I have seen numerous Balanchine performances by the Pacific Northwest Ballet Company, the major ballet company in the region. The Company’s director is Peter Boal, an ex-NYCB principal dancer who trained under Balanchine. To watch his dancers perform the Balanchine repertoire is to witness a company imbued with a rich technical and stylistic understanding of Balanchine’s choreography. As the English dance critic Judith Mackrell once said ‘no one dances Balanchine like the Americans.’ They have an attack and sheer physicality that makes even the most restrained of Balanchine’s works glow with energy and verve. Balanchine and America was a marriage made in heaven. Balanchine understood and loved America and Americans. He also understood the psyche of the country, the athleticism of its dancers and he translated that into glorious dance.
While I would contend New Zealand dancers don’t really understand how to dance Balanchine, there is no such issue for them in dealing with the choreography of Jiří Kylián, the master choreographer from Czechoslovakia. Just as Balanchine reveals his deep musical knowledge by taking a structuralist approach to Mozart, so Kylián revels in the emotional impact of this glorious music. His theme is sex, and in ‘Petite Mort’, a metaphoric way of describing sexual ecstasy dating back to the Medieval/Renaissance period, he creates some sublime choreography to the Piano Concerto in C Major (Andante), and Piano Concerto in A Major (Adagio). Petite Mort, created for the Nederlands Dans Theater, had its premiere at the Salzburg Festival in 1991 on the second centenary of Mozart’s death. Since that time it has been performed by numerous companies around the world.

While I watch Petite Mort as six male dancers (wielding foils) and six female dancers perform this beautifully sensuous and meticulously crafted choreography, I am simultaneously overwhelmed with memories of another sort of death – my father’s, from cancer, which took place slowly during a hot Tauranga summer in 1993. A constant companion to his dying was Mozart’s Piano Concertos K467 & K488 which carried him off to a peaceful end, so it is a bitter sweet viewing for me.

Pairing this work in the programme are Mozart’s German dances, Sechs Deutsche Tanz, given wonderful Chaplinesque treatment by Kylián in Sechs Tanze. Be-wigged, white faced, corseted, the dancers romp through the manic choreography with glorious athleticism and perfect comic timing. I like to think that a young mischievous Mozart would have loved this dance treatment of his music.

It is a pretty tough assignment for a young choreographer to appear on the same programme as two master choreographers. Perhaps predictably New Zealander Corey Baker’s work The Last Dance, with a very strange and largely unsatisfactory treatment of Mozart’s Requiem in D Minor K626 by Duncan Grimley, struggles to make an impression. Based on his recent artist’s residency at Antarctica and the phenomenon of melting ice shelves, the work lacks the choreographic invention and structure to deal with such a momentous issue. The design is interesting with a large box structure (earth?) occupying a large part of the stage. Ultimately its dominance overwhelms the dance and severely limits the choreographer’s options.

Having said this, I really enjoyed Dancing with Mozart, and I found the juxtaposition of these different works immensely stimulating. And it is a very good idea to include a young New Zealand choreographer in the programme. I hope the current artistic director will resist the temptation, unlike the two previous foreign artistic directors, to subject us to her own choreography. We’ve certainly had enough of ADs’ treating the Royal New Zealand Ballet as their own special toy shop to be raided at will.

Back to my fellow audience members in the third tier of the Wellington Opera House. They appear bored out of their brains with the Balanchine work. They clap and roar enthusiastically at Corey Baker’s work. They clap politely at the Jiri Kylián works but I seem to be the only person laughing out loud at the choreographic jokes in Sechs Tanze. Ah well.